Amaryllis (Hippeastrum sp. cultivars) are grown in most cold regions of the United States as an indoor houseplant that people work hard to force to flower. One of the nice things about living in coastal Orange County is that plants like amaryllis can live year-round outdoors in the soil, and need no forcing to flower.

We put in a few small plants 7 or 8 years ago, and they’re now giant bulbs that send up multiple flower stalks every spring. I’ve been watching this year’s flowering stalks grow daily, and finally made some time last week to go out and get some pictures.

Amaryllis flowers grow in inflorescences, clusters of multiple flowers growing from a single leafless stalk called a scape (three scapes with their developing inflorescences are visible in the picture above). The actual flowers develop at the tips of the scapes surrounded by two modified leaves (bracts) called spathes.

In the image above you can see the two spathes starting to split apart on the front-most inflorescence, revealing one of the red amaryllis flowers inside. As the spathes open further, the multiple flowers contained inside start to elongate their pedicels (the stalks that attach each flower to the scape) and they emerge from the spathes:

Amaryllis are showy, long-lasting flowers, but I think the buds are under-appreciated.

Technically these shots were fun to capture. I wanted to create a studio-esque feel, so the viewer could focus on the details of the buds themselves without distraction from the background. I worked on a partly cloudy day, and set up a black backdrop behind the subjects I wanted to photograph, using a reflector to add highlights or fill as needed. The second image is a blend of five images to get additional depth of field (using the technique described in my poinsettia behind the scenes post), but the first is a single-frame capture. All plants were left completely intact, and if all goes well they’ll be in full flower soon.

To see more of my pictures of plants, head to my plants portfolio page or my botany demonstrations gallery.

Here are two more images of amaryllis. The first is another image from the day’s work (a single inflorescence up close) and the second is a closeup of one of my amaryllis flowers from last year. 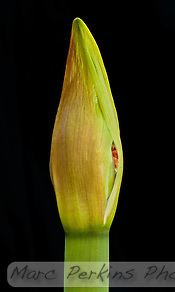 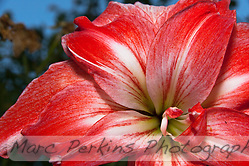