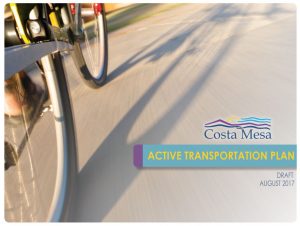 [This is the first article in a series on Costa Mesa’s draft Active Transportation Plan.  The next article discusses the proposed Tanager Drive Trail extension and Fairview Park multi-use trails, the third article discusses the plan’s implications for Orange Coast College, the fourth article is an update on the Tanager Drive Trail extension, and the fifth article summarizes changes to the plan as it progressed through city committees.  The plan was adopted by the City Council in June 2018. ]

The city of Costa Mesa is working on a new active transportation plan. The plan is being drafted by Stantec, with input from city residents, city staff, and the city’s Bikeway and Walkability committee. The most recent version of the plan available online is the August 2017 draft.

The Bikeway and Walkability Committee is currently soliciting public input on the plan, with the second of two public outreach sessions happening Wednesday, December 6, 2017 at 7:00pm in conference room 1A at Costa Mesa City Hall.

To help people understand this new plan, which is more than 75 pages long, I’ll try to summarize some of the key elements in this post.

The city currently has 43.5 miles of bike routes, though only nine of those are Class I (off-street) bicycle paths that completely separate cyclists from traffic; most of the rest are bike lanes painted on the edge of roadways.

Here’s what the colored lines on that map mean:

Indicated on the map with red lines, these are pathways that completely separate the people on them from motor vehicle traffic. These are by far the most welcoming to people of all ages and all skill levels, such as children, inexperienced bicyclists, or people with disabilities. Class I trails are not just for cyclists: dog walkers, roller skaters, joggers, kids on scooters, and everyone else can use them too.

The shining star of Class I bicycle paths in Costa Mesa is the Harbor Boulevard Cornerstone Trail, built in 2016, that runs along Harbor between Merrimac and Fair.

Some of the best cycling/walking/recreational areas in the county are anchored by Class I trails: Newport Back Bay, the San Diego Creek Trail, Castaways Park, and more.

Indicated on the map with blue lines, these facilities are what most people think of when they hear “bike lane”: these are (usually) narrow lanes painted near the shoulder of the road. They provide far less protection from cars than Class I facilities, and can be intimidating to use on streets with lots of high-speed motor vehicle traffic.

Indicated on the map with green lines (for bike routes) and purple lines (for bike boulevards), these are typically used on low-traffic-volume streets where there is not room to place any of the other types of bike facility. Instead, for bike routes, the street is signed and painted to indicate that bicyclists may occupy the full lane (often with “sharrows” painted on the pavement, though Costa Mesa has not generally used these yet). Bike boulevards are like bike routes, except that the street is also re-engineered to introduce traffic-calming measures (such as speed humps, medians, extensions of the curb at corners, or traffic circles).

Costa Mesa currently only has two miles of bike routes, which are poorly marked, and no bike boulevards (though I believe the city is currently working on turning some of 19th Street into a bike boulevard).

Indicated on the map with yellow lines, this is a newly developed type of bicycle facility; there is none currently in Costa Mesa. Protected bike lanes are essentially traditional bike lanes (Class II facility) with some type of additional physical protection/separation from car traffic lanes, such as concrete dividers, curbs, planters, bollards, etc.

The Class I trails along Harbor (the Harbor Boulevard Cornerstone Trail and Joann Street Trail) allow people to travel from Merrimac almost all the way to Victoria off-street, with only one street crossing, and the Joann Street trail south of the golf course allows people to travel between Harbor and Placentia safe from car traffic. The Class I trails inside Fairview Park allow cyclists to easily enter and exit the park and the Santa Ana River Trail (allowing bike commuters and recreational cyclists easy access to this great resource). The Class I trail on Victoria allows users to safely traverse the 0.7 miles of the road that it’s present on (the rest of Victoria has a Class II bike lane on it).

Costa Mesa has a large number of bike commuters. Overall, 2.2% of the city residents ride their bikes to work, the highest percentage of bike commuters of any of our local cities, and more than double the county (1.0%) and state (1.1%) averages.

Much of the infrastructure currently in place in Costa Mesa has some problems, including bike lanes that are narrow (placing cyclists at risk of being hit by passing vehicles) or next to parked cars (placing cyclists at risk of being hit by opening car doors), bike paths only on one side of a street, bike lanes that end before intersections (forcing bicyclists to merge into a lane of faster-moving car traffic to continue traveling straight), road sensors that fail to detect bicycles to trigger stoplight changes, and inadequate signage and markings (making it difficult to figure out where to ride).

These problems have likely contributed to a sobering statistic: in 2013 there were 87 collisions with bicyclists resulting in injuries or fatalities, causing Costa Mesa to have the third worst injury/collision rate of 56 similarly sized California cities (data from the California Office of Traffic Safety).

The city as a whole has a problem with interconnectedness: there are many gaps in the cycling infrastructure that give people no bike-specific facilities leading to common destinations.  For instance, Orange Coast College has only two bike paths connecting to it (along Fairview and Merrimac), and they are both Class II bike lanes that end before every intersection. Many of the busiest shopping districts of Costa Mesa (Harbor Boulevard, 17th Street, 19th Street, and Newport Boulevard south of the 55) completely lack cycling infrastructure, and other shopping districts (e.g., South Coast Plaza, Fairview, Baker) have only Class II bike lanes near them, making it difficult for residents to bike to their local businesses.

The active transportation plan notes that the city could use additional support facilities for cyclists, such as bike racks, showers at workplaces, and secure bike parking at transit connections.

One of the biggest improvements in the new proposal is the amount of connectedness: once all of these facilities are built, it will be far easier for people using active transportation to get where they want to go on routes welcoming to them. For example:

Speaking personally, I’m excited about the draft plan. If implemented, the changes discussed would make it dramatically easier and safer for residents of Costa Mesa to walk, bike, skate, or scoot wherever they need to go. And, as a result, this plan should reduce traffic congestion.

Whether you’re thinking about getting to school, exercising, commuting to work, running errands, heading to a coffee shop, going for a joy ride, or just spending family time together, this plan has something for nearly everyone.

Read the plan itself

But don’t trust me; head over to the Costa Mesa Bikeway and Walkability Committee page and read the plan for yourself.

To help you orient yourself, here’s an outline of the plan’s chapters: