After taking pictures of pelicans at La Jolla this past January, Greg and I headed down to Cabrillo National Monument in San Diego to get pictures of Old Point Loma Lighthouse. I probably shouldn’t admit this, but the lighthouse was what I was really looking forward to when I woke up that day; birds and sunrises are fun and all, but I have a mild obsession with lighthouses1.

Old Point Loma Lighthouse stands on the top of a hill at the end of Point Loma, one of the peninsulas that shelter San Diego’s natural harbor.

The two buildings visible in that image are the primary lighthouse (the multi-story painted brick building to the left) and the assistant keeper’s house (to the right).

The lighthouse and its tower are entrancing with their contrast and symmetry:

The lighthouse started operation in 1855 with a Fresnel lens; its light was visible more than 25 miles out to sea.  The lighthouse currently contains the Fresnel lens from the Mile Rocks lighthouse that was moved to the lighthouse in the 1980’s and installed with the light offset by a few inches (so it’s not nearly as powerful as it should be).

The lens and latern room are gorgeous up close:

I didn’t notice these fully while on the site, but when I processed the images I discovered that the edge of the tower’s roof is finished with beautiful details:

I love the cutouts on the roof’s edging, with their Escher-esque detailing. If you look at the metal itself, it’s cut into patterns of waves flowing into each other, yet if you look at the void spaces you can see either horns or birds (I see horns, Michelle sees birds). There are also gargoyles / lions at each corner of the roof. I wonder if these details are original, or a later addition.

As the lighthouse is no longer a functioning navigational light (it was decommissioned in 1891 due to frequent interference from fog), it’s open daily for people to explore. While the latern room itself is sealed off, visitors can climb the staircase to nearly the top of the lighthouse tower (to where the window is in the “From the East” picture above). Climbing lighthouse stairways is just awesome, and this one had a little landing Greg and I could set up on to photograph the beautiful symmetry.

That was one cramped little landing with all of our gear set up, and we both had to wait quite a while for an opportunity to capture images of the stairs with nobody else in the tower. But it was worth it, and how could one possibly mind spending time inside a lighthouse? 🙂

Oh, and if you want to see the scale of the stairway in the tower, here’s a self portrait of me in the stairway:

1 This will hopefully be the inaugural post of a multi-post series highlighting lighthouses I’ve photographed in the past year. And don’t get me wrong – the pelicans at La Jolla Cove turned out to be awesome.

To see more pictures from the lighthouse, head to my Old Point Loma Lighthouse Gallery or click on the thumbnails below. 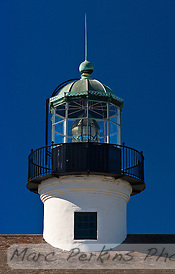 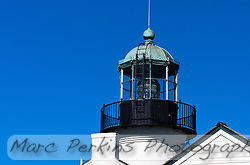 Cabrillo National Monument: Old Point Loma Lighthouse is in Cabrillo National Monument, which is at the end of Point Loma peninsula in San Diego, CA. The national monument’s webpage has an excellent directions page, including a great regional map. From interstate 5 you’ll need to take a few turns on city streets that aren’t necessarily well marked, so print out a good map or have your GPS handy. You’ll also be driving through an active naval base to arrive at the national monument, so park hours are strictly enforced. You’ll need to pay an entrance fee; parking was plentiful on site when we arrived on a winter weekday morning.